3CX has released version 18 of its namesake telephony server and I’m happy to report that it is compatible with MCB GoldLink to 3CX.

3CX version 18 includes a new desktop app written in Electron. The Electron app does not support the API used by GoldLink. The good news is that 3CX continues to provide the “legacy” 3CXPhone for Windows app. In fact, 3CXPhone has received a minor update (to version 16.3.0.261) with the release of 3CX version 18. You can even run the Electron app and the 3CXPhone app at the same time.

The 3CXPhone app functions as usual, reporting on call status and giving options for managing the call.

Most importantly, it still calls GoldLink in the background, which tells GoldMine to find the record of inbound callers and to create call history record on inbound and outbound calls: 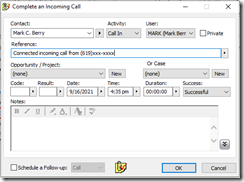 If you’re already running 3CX, once you upgrade the server to version 18, 3CXPhone will prompt you to update the client as well. If you’re new to 3CX, you can find a link to download the 3CXPhone app in the welcome email that is sent when you add a user:

Thank you, 3CX, for continuing to support this great Windows client and the apps that depend on it.