I’m testing Azure Backup client on a Server 2012 R2 Essentials machine. On this machine, I had two options:  an Essentials plugin and the standard agent. I tried the Essentials plugin but it uses the “old” (classic) Azure portal, plus the retention options were limited to 1-30 days, no weeks or months. So I removed the plugin and installed the standard Azure Backup client, following these instructions. However, it didn’t work out of the box.

Note that Azure Backup client does direct folder-to-cloud backups but it does not support bare-metal backups. For that, you need a local Azure Backup server, a free program based on System Center Data Protection Manager. Here’s a Channel 9 video on that and a nice article by Aidan Finn. For now, I’m just testing the client agent.

The problem is that backups kept failing with this message:

I thought it might fix itself after a few days, but in spite of transferring about the right amount of data to the cloud, the errors persisted.

I eventually found this article that points to KB2816671. I downloaded and ran the hotfix from that article (cleverly named Upgrade.exe). I saw it extract files, then nothing happened. I ran it again. Again no setup confirmation as I’m used to with Microsoft hotfixes. The drive where it extracted the files no longer had the files. I extracted the files manually and tried running the executables. One of them displayed a partially-drawn wizard, then hung.

I decided to reboot and give Azure Backup client a couple days to see if the fix was applied in the background and if it helped.

And it did. Since installing the hotfix, Azure Backup client has now completed two scheduled backups successfully: 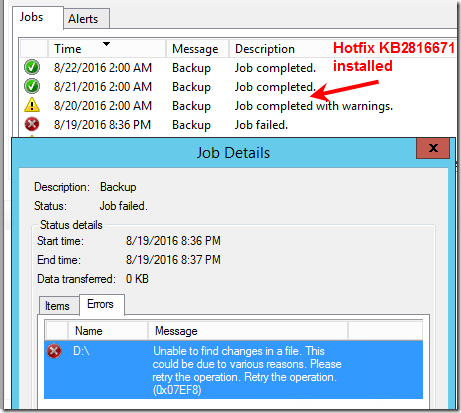 I see now that this hotfix was announced in February 2013 on the Official DPM Team Blog. I wonder why it hasn’t been incorporated into the product in the last 3 1/2 years. If you’re unable to back up with Azure Backup client, try the hotfix.