A few months ago, I added a blazing-fast Samsung 970 EVO NVMe drive to my old Lenovo TS140 server. It’s been performing well, but I noticed that I’m getting thousands of these events every day:

The event log is only 1MB. It stores about 2000 messages and takes about 90 minutes to fill. So I’m getting roughly 32,000 of these messages per day. When I see that kind of “thrashing,” I assume something is wrong.

I’ve had StorDiag 504 errors before, as reported here. In that situation, the solution was to disable and stop using a certain USB hub. That’s not an option here.

I’m hosting the Samsung SSD in a StarTech PEX4M2E1 adapter. A very helpful StarTech support rep clarified a couple things for me:

The StarTech rep suggested that “the drive does not support this TRIM function.” But which trim function? According to the specs on the Samsung 970 EVO page, the drive itself does support TRIM. But are there specific TRIM functions that are not supported? Let’s search the other data from the message: IrpStatus = 0xc0000472. This took me to a page in Russian that lists that error:

I think I get that. When researching TRIM support, I found an article that used trimcheck to determine whether a device supports TRIM. Based on the screenshot in the article (I haven’t tried this), trimcheck writes data, then trims the drive, then tries to confirm that that area of the hard drive contains zero’d bytes (0x00).  The trimcheck for the 970 SSD passed, but I’m guessing that Windows is issuing a different command that is not able to read the 0x00 bytes.

If a command always fails because the drive you are running it against does not support the command, the obvious thing would be to stop running the command. But how? According to ghacks.net, StorDiag is a new in Windows 10 (and thus Server 2016). tenforums also covers it. But both only talk about running stordiag.exe manually for one-off analysis. How/where is StorDiag running automatically? I don’t see it in Task Scheduler (and honestly, 20+ invocations per minute would surprise me if it came from Task Scheduler).

I could probably disable the StorDiag errors entirely using the PowerShell command Stop-StorageDiagnosticLog (another thanks to the StarTech rep). But I prefer to leave error logs enabled so I get notified of, you know, errors.

I realized that the repeated logging itself may be “using up” the SSD hosting my OS (which is not the Samsung 970) just by writing to the log so much. So I decided to go ahead and disable the log, even though that means I won’t see other errors. (I probably wouldn’t see them anyway as they would be lost in the flood of bogus errors.)

After reviewing the Stop-StorageDiagnosticLog PowerShell command, it looks like that is intended for interactive use (with the corresponding Start- and Get- commands). So I just disabled the event log in the GUI by right-clicking, selecting Properties, then unchecking Enable logging: 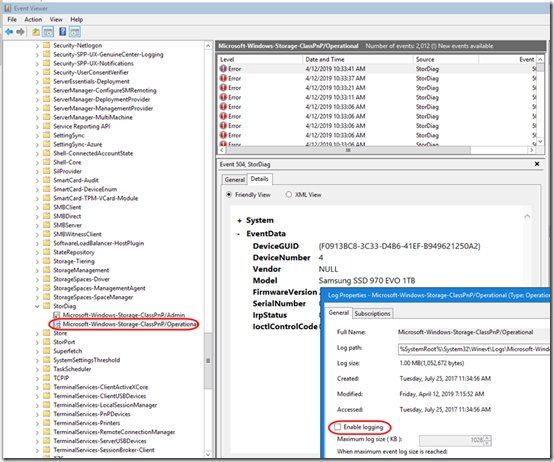