Downgrading to .NET 4.7 should solve this issue, but because 4.7.1 was included in a rollup, you may have to uninstall several updates to roll back to 4.7. It’s probably easier to remove 4.7 altogether.

Note Any change to .NET could cause issues with server applications or components. Proceed at your own risk!

On Server 2016, open a PowerShell prompt and run this on one line (you can also directly inspect the value in regedit if you prefer):

Compare to the Release numbers for Server 2016 in this article. Here is an abbreviated list:

Block Installation of .NET 4.7 and Later

Save the following text to a file named “Block .NET 4.7.reg” and merge it to your server.

If your .NET version is 4.7 or later, open Control Panel > Programs and Features > Installed Updates, search for KB3186568, and uninstall it:

Run the PowerShell command again to confirm that you are on .NET 4.6.2.

You should now be able to hide dashboard alerts.

Even after uninstalling 4.7, you will not be able to re-activate hidden alerts. The progress bar just runs forever:

You may also get dashboard crashes.

As a workaround, delete the alert. It should be re-detected if the condition still exists.

Can’t delete the alert either, again seeing an endless progress bar? Try to re-activate it. That worked for me one time.

.NET 4.7.2 is releasing to Windows 10 1607 this month via Windows Update, but it looks like so far it it is only available from the Windows Catalog for Server 2016. See this article. Be prepared by blocking .NET 4.7.2 in the registry as shown above.

Add your vote to the UserVoice issue here:
https://windowsserver.uservoice.com/forums/295047-general-feedback/suggestions/34562071-fix-net-incompatibility-with-essentials-dashboard

As mentioned above, even with .NET 4.6.2 on Server 2016 with the Essentials role, I am unable to ignore alerts. This time I did not want to delete it; I need to permanently ignore it. I decided to try the My Server 2012 R2 app. I installed the app from the Microsoft Store on a Windows 10 Pro 1803 machine, logged on the the (remote) 2016 server, and chose Ignore: 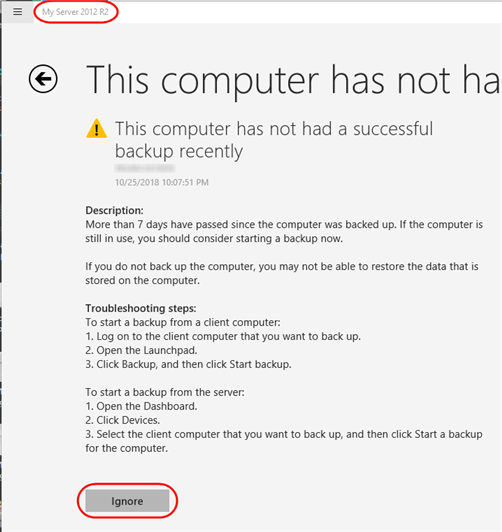 The warning changed from yellow to gray in the dashboard: