One small client has a Server 2012 R2 Essentials domain controller and a few Windows 7 desktops. It’s a wired, mostly gigabit network. Some desktops, especially those that have are behind a couple switches, often have problems confirming that they are on the domain, so they come up on the Public network, which messes up RDP connections.

The problem, of course, is that the Network Location Awareness (NLA) service can’t determine that the machine is on a domain, so it falls back to Public:

Several articles suggest changing the NLA service to “Automatic (Delayed Start)”. That’s has not been enough in this environment.

The only sure way that I have found to force the NLA service to re-detect the domain is to stop and restart the network adapter. In fact I have script a RestartNetworkAdapter.cmd on many computers to do just that:

Using a script allows doing this even when connected remotely, but it’s awkward and you have to customize the interface name for each PC.

Today I decided to dig into this further to see if I could come up with a better solution.

Then I found this TechNet blog article on how the NLA service works. The big news to me in that article is this:  “If the Connection Specific DNS Name matches the HKEY_Local_Machine\Software\Microsoft\Windows\CurrentVersion\Group Policy\History\NetworkName registry key then the machine will attempt to contact a Domain Controller via LDAP.”

I checked that registry key and it in fact contained the correct value, let’s say “mydomain.local”.

But how/where is the Connection Specific DNS Name set? This article offers guidance:  you can set it in the adapter’s DNS properties. 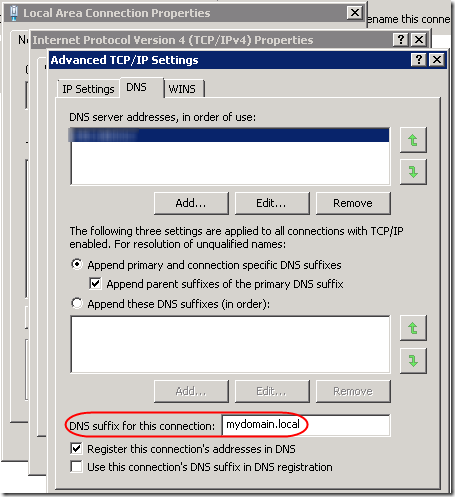 By the way, the Primary DNS suffix for the computer is set in System Properties when you specify the computer name. When you click the More button, you’ll see this dialog: 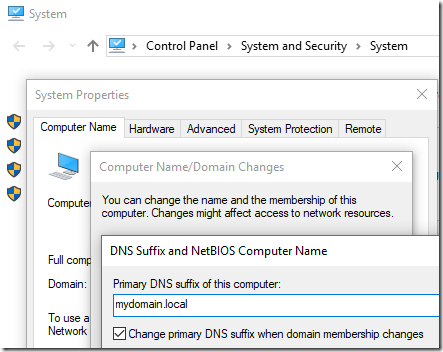 You can also override that in group policy: Computer Configuration  Administrative Templates > Network  DNS Client > Primary DNS suffix. The Primary DNS Suffix defaults, sensibly, to the domain name. However the TechNet article cited above wants us to match Connection-specific adapter settings, hence the update above.

I had already set a fixed IP address for the primary DNS server, pointing to the domain controller. This is critical for all kinds of domain-based stuff (group policy, etc.). However I did not have “DNS suffix for this connection” filled in. I’d already seen (using ipconfig from a command prompt) that this machine is using both IPv4 and IPv6 to talk to the domain controller. So I added the “mydomain.local” string to both IPv4 and IPv6 profiles of the adapter. Voila! After a reboot, the machine immediately came up on with a Domain profile:

Well, that worked two times out of three. But still it sometimes comes up Public. Is there anything else I can do to help it be more reliable? The only other idea I have at this point is to make the NLA service dependent on having an active network connection. Can’t hurt, right? I ran the following from an administrative command prompt:

Three more reboots and the machine has come up as Domain each time.

Note that the space after the equal sign (=) is intentional and required.

1. Set the NLA service to “Automatic (Delayed Start)” and only when the network is available:

2. Set the Connection Specific DNS Name to match the domain controller’s local domain. Run ncpa.cpl and do this in the iPv4 and IPv6 properties of the network adapter (see screen shots above). There might be a way to script this, but it would require enumerating network adapters, so I’ll just do it manually for now. Update:  this can be set in Group Policy. See above.

Unfortunately, all of these settings are still not always enough to get Network Location Awareness to detect the domain profile. I still frequently find myself restarting the network adapter to get it to re-detect the location. (On some machines, it is possible to to restart only the NLA service.)

If you run a remote monitoring tool, see this post for a script that will alert you when the profile is not what you expect: Script to Check Current Firewall Profile.

It occurred to me that this NLA issue could be a more general issue with the client not being able to contact the domain controller. On one machine with this issue, at startup, in the System event log, I have a NETLOGON 5719 error, “This computer was not able to set up a secure session with a domain controller….” I was reminded of an issue eight years ago relating to switch configuration:  Gigabit Switch Spanning Tree Causes Slow Logon.

It helped then to set ports connected directly to computers to Fast Link on the Dell switch. Unfortunately, that option is not available in the UI of the new UniFi switch. However as suggested in this Reddit thread, I was able to change the Spanning Tree priority to 8192 to identify the UniFi switch as the root switch. Alas, that alone was not enough to solve the NLA issue; the machine still comes up as Public most of the time.

I’m now running the following script on affected machines to restart the NLA service. Copy and paste this as RestartNLAService.cmd, then add a Scheduled Task, Trigger as a Startup task with a 1-minute delay, Conditions limited to any Network connection being available. Use at your own risk!

If you need to quickly change a network adapter from Public to Private (e.g. because Public is blocked in the server’s firewall and the stupid workstation won’t change to Domain), see this post.