Almost a year ago, I wrote about how the Windows 10 Update Breaks 2012 R2 Essentials Connector.

I thought that was fixed if you install KB3172614 on your server as MS blogged here.

Robert Pearman explained in July what was going on. The old connector was a KB article, which gets clobbered when you install a Windows 10 upgrade. If you have this connector, on the client PC, the Launchpad “About” will show version 10.0 (Build 10240) Copyright 2015:

The list of installed updates will include “Windows Server Essentials Connector”: 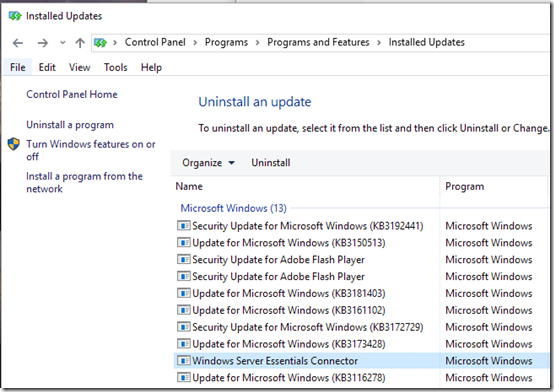 The list of installed programs will not include “Client Connector for Windows Server Essentials”:

In my test, over-installing the connector (i.e. without uninstalling first) was not enough. So first, from the list of installed updates shown above, uninstall the Windows Server Essentials Connector. Note this does require a restart but does not remove your computer from the domain (if it’s on one), but it does change your NIC to use DHCP for DNS. That means in a default setup, your machine will behave as if away from the office and will not be using the server for DNS. That should be okay for as long as this takes you.

Next, go to your server’s http://server/connect page, download the connector, and install it. When you finish the wizard, it will tell you you will be logged off, but you won’t be. Your NIC has the fixed IP of your server for DNS again. When I checked backup items from the server dashboard, the settings had been retained from the earlier connector.

After that, when you apply a Windows 10 upgrade like the 1607 Anniversary Upgrade, the Essentials Connector will stay installed.