One suggestion for blocking the Cryptolocker ransomware virus is to prevent execution of *.exe files in the %AppData% folder and its subfolders. I wanted to make the restriction a little more generic (to cover mutations of this virus and others) and discovered these issues under Windows 7:

The threat is serious enough that I’m willing to try blocking execution of all programs in the users’ profiles. Time will tell how much that gets in the way of normal system operation and updates (see “Drawbacks” below).

We want to add a Group Policy Software Restriction Policy that blocks execution of any file (not just .exe’s) in %UserProfile%.  According to KB310791, “Path rules apply to all programs that run from the specified local or network path, or from subfolders that are in the path,” so we only need one policy to cover the whole folder tree. [Update November 19, 2021 KB310791 is no longer available on Microsoft’s site. You might be able to find it on archive.org.]

Create a new Group Policy object and set up a Path Rule like this with the Path name %UserProfile% and Security level of Disallowed. 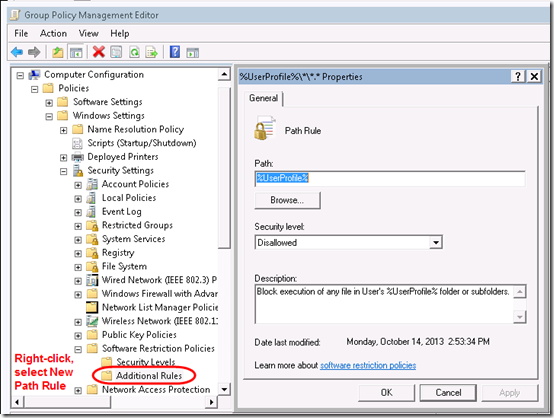 Make sure you link the GPO to an OU or to your domain. On the workstation, apply it with gpupdate and check it at the with gpresult /r. Then test it on the workstation by copying a “known good” executable to various paths in the user profile and trying to run it. (I tested with a CutePDF installation file.) You should see messages like this:

Note that the message pops up after the Open File – Security Warning dialog(“Do you want to run this file?”) but before any UAC prompts. And there should be a corresponding message in your Application event log:

Several legitimate programs use subfolders of %UserProfile% for temporary storage of installers and executables.

You’ll need to adapt procedures to put installers somewhere outside the user profile, or create exceptions to the Software Restriction Policy.

Well it didn’t take long to discover that the policy above is too broad. Here are some examples of things I could no longer do, and how I’m working around them.

Hint Review the SoftwareRestrictionPolicies events in the Application event log to see exactly what path is being blocked, then create corresponding exceptions.

I could not start programs from program icons I had pinned to the taskbar or the Start menu. For example, it blocked:

Adding a New Path Rule to allow Basic User access to %UserProfile%\AppData\Roaming\Microsoft\Internet Explorer\Quick Launch\User Pinned\*\*.lnk takes care of that. Note the “*” wildcard to cover both the Taskbar and StartMenu folders.

I found I also need to add an exception on %UserProfile%\AppData\Roaming\Microsoft\Internet Explorer\Quick Launch\*.lnk to cover the classic Quick Launch icons. Update October 22, 2013:  Apparently this one needs Unrestricted access if the shortcut uses a known program to open a file, e.g. the shortcut is to a text file and you expect it to open in Notepad.

An exception on %UserProfile%\AppData\Roaming\Mozilla\Firefox\Profiles\*\extensions\LogMeInClient@logmein.com\plugins\x86\LMIGuardian.exe seems to take care of that—note the asterisk (*) in the middle of that string to “wildcard” the Firefox profile name.

Install Malware Bytes. Even with the installer stored in a special folder (C:\InstallTemp), it blocked access to C:\Users\<User>\AppData\Local\Temp\is-63KFJ.tmp\mbam-setup-1.75.0.1300.tmp.

This one doesn’t make sense to me, unless the .tmp file is somehow executable. I was able to get around it by allowign Unrestricted access to %UserProfile%\AppData\Local\Temp\*\*.tmp.

This is turning into a whitelisting approach to user programs stored in the user profile, where everything is blocked unless explicitly allowed. That’s not a bad principle in general, but it’s a lot to try to develop piecemeal like this. I’ll see how far we get in the next few days, but I may have to abandon this approach.