My Dell PowerEdge 2900 has two Broadcom BCM5708C NICs. They’ve been running okay on a fairly old Windows driver, but after some connectivity issues with a new ThinkPad Edge laptop, I decided to update the driver.

First I updated the firmware to 6.2.14 using the Windows install package from the Dell site. That went fine.

Then I downloaded and ran Dell’s Windows install package for the 16.2.0 driver. I didn’t need the advanced control suite, load balancing, failover, or VLAN, so I just went with the default install options: 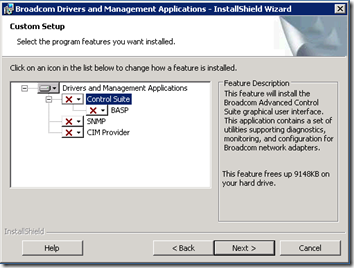 The first install failed, something about not being able to remove a folder. I rebooted and ran the installer again, choosing the Repair or Reinstall option. This time the install finished successfully.

Unfortunately, the NICs would not start, so the server was offline. I got the following error in the system event log:

Well maybe we should just roll back until we can research what went wrong. But wait, the install apparently deleted the previous driver, so rolling back is not an option: 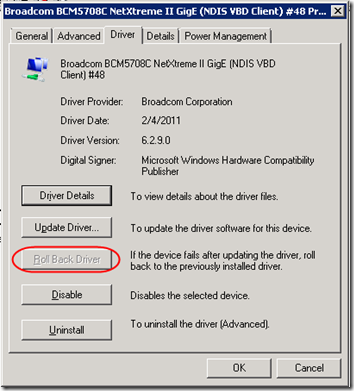 When I clicked Update Driver, Windows told me I have the latest driver (though I don’t know how it could check since there was no Internet connectivity).

I had seen something in the installer about the “NDIS intermediate driver.” Could that be the “bus driver” referred to in the l2nd event 24?

I ran the installer again, this time telling it to install the Control Suite and the BASP (Broadcom Advanced Server Program), which includes the NDIS driver: 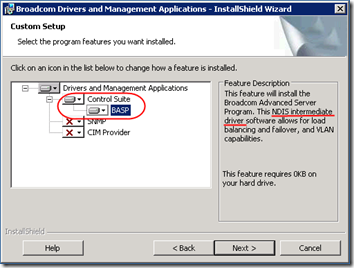 The installer did not prompt me for a reboot, and the NICs were still offline. The good news is that after a reboot, the NICs came back up.

I don’t understand why the NDIS driver was required this time when it was working fine without it. Nor do I understand why, if it is required, it is not installed by default. But at least my server is back online.