I’ve been working on some PowerShell scripts that I want to deploy to GFI MAX Remote Management, a monitoring tool I use in the MSP side of the business. I’m still working out the kinks, but here are some tips I’ll want to remember later. Maybe they’ll help you too.

Before anything will work, you’ll have to enable PowerShell on the target computers. At least on servers, it’s disabled by default. To enable, start PowerShell on the target machine and run set-executionpolicy. When prompted, tell it to change the policy to remotesigned. Update 3/2/2011:  can also be set with Group Policy (see the bottom of this article; be aware of this possible issue).

The biggest challenge in deploying scripts is figuring out why they fail.

I discovered by trial and error that if I instead deploy the script as a 24×7 check and it fails, the failure message itself is returned in the dashboard and in the alert failure email. If you click on the dashboard message, you get the full message. Much more helpful.

Also, by deploying as a 24×7 check to a server on a 5-minute cycle, you’ll get to see output more frequently; in fact, you can open the Advanced Monitoring Agent on the server and execute (though not edit) the task: 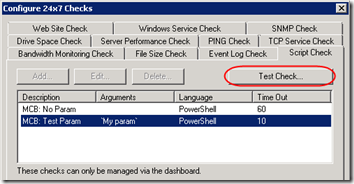 Here is what I’ve been able to deduce regarding how MAX handles parameters.

2. If you pass parameters surrounded by double quotation marks (“), they will be temporarily converted to single quotation marks so the script launcher can be called. I found this example of how the task is started by digging through MAX’s debug.log file:

Inside task_start.js, we have this line which converts the single quotation marks back to double before passing them to the script:

(The /g tells it to do a global replace. See this article.)

The problem is, PowerShell doesn’t like double quotation marks around parameters.

I have a little PowerShell script that echoes back one parameter:

If I call it with double quotation marks around the parameter, it thinks it’s two parameters, and the script fails since it only accepts one parameter:

If I call it with single quotation marks around the parameter, the script succeeds:

Two Workarounds and a Proposal

The first workaround is to avoid parameters containing spaces; then you can pass parameters without any quotation marks.

This isn’t very safe, or practical, since GFI can replace the task_start.js script at any time.

The next problem is, even if we get the parameter quoted correctly, task_start.js is hard coded to append an extra parameter to the command before executing it:

nUID is an internal task ID used by MAX, so for task 156, it would append " –logfile .\\task_156.log". Apparently it wants to save a log file to the Advanced Monitoring Agent folder (one level up from the Scripts folder). But I haven’t allowed for a –logfile parameter in my PowerShell script, so it ends with this error:  “A parameter cannot be found that matches parameter name ‘logfile’.”

If I modify the task_start.js command to omit the –logfile parameter:

it does in fact complete successfully and comes back to the dashboard with the script output:

But I’m nervous about removing the –logfile parameter from the task_start.js script. It might be there for a reason ;).

I’ll see if I can get some clarification on the way GFI MAX handles PowerShell scripts with parameters. Stay tuned for updates.

GFI Support has also confirmed that you can output up to of plain text from your script and see that output directly in the dashboard. [Update November 7, 2018:  now limited to 10,000 characters—see comments below.] The first line is displayed in the grid view; if you click on that hyperlink, a More Information dialog opens that shows the rest of the output. That’s very cool, and should eliminate the need to send script results by email in most cases.

In fact, if you return a non-zero (“failure”) exit code and deploy the script as a 24×7 check, it will even send you an email containing all the results. The same should work for a daily DSC check (not tested). It does not currently work for an Automated Task, since MAX only sees exit code 1, which it reports as “Invalid Script Arguments.” (MAX reserves return codes 1000 and below:  see this post.)

Even if you return 1001 from PowerShell, it doesn’t get back to MAX. This has to do with how PowerShell returns exit codes as explained in this article. Updating task_start.js to append “;exit $LASTEXITCODE” to the command line when calling PowerShell should allow MAX to “see” the actual PowerShell return code.