I’ve recently changed my in-house PBX from Linux-based PBX in a Flash to Windows-based 3CX. One of the cool things about 3CX is the included 3CX Assistant, a call manager that runs on each user’s PC. Not only does it show who is on a call, it has built-in functionality to pop up the caller’s Outlook contact when a call comes in.

But what if you’re using another contact manager? I’m using GoldMine 6.5 as my primary CRM. 3CX can’t handle GoldMine natively, so I wrote a little program called MCB GoldPop to do it, and I decided to give it away. You can download MCB GoldPop below.

Download MCB_GoldPop.1.0.0.zip below. Unzip GoldPop.exe and place it somewhere on your local drive, e.g. under C:\Program Files\MCB GoldPop. Note that there is no installation program per se; the program is ready to run as is.

This step isn’t necessary if you want to use the default parameters. In fact, usually you will never see MCB GoldPop—it just runs momentarily in the background whenever you receive a call through 3CX, loading the matching GoldMine record if it is available.

However MCB GoldPop does have a user interface where you can review and test the various options, and it will even create a sample command line so you can use those options when you run GoldPop from the 3CX Assistant. Normally the only options you would change are Raw Caller ID (for testing) and Dialog Parameter. 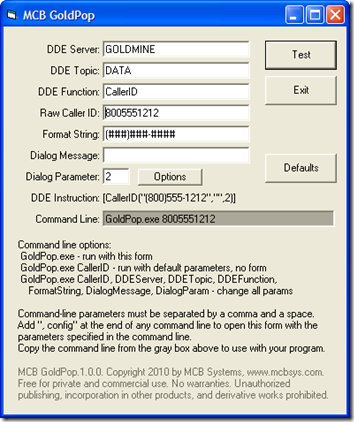 MCB GoldPop uses a method of communication called Dynamic Data Exchange (DDE) to pass the incoming CallerID from 3CX Assistant to GoldMine. When GoldMine received a CallerID from MCB GoldPop, GoldMine moves to the record matching the CallerID. Note that GoldMine’s “CallerID” function only searches the Phone1 field in GoldMine 6.5, so if the caller’s number is not in that field, the GoldMine record won’t be found. You can adjust how GoldMine handles the CallerID with the Dialog Parameter—see the MCB GoldPop user interface for more information.

Update May 23, 2012 Starting with GoldMine 6.7, there is a new “CallerIDAll” DDE function which searches all primary phone numbers (but not the fax number). Although I haven’t tested it myself, a user reports that simply substituting “CallerIDAll” as the DDE Function name allowed searching all phone fields. (GoldPop does not currently support the new, fourth parameter of “CallerIDAll” that would allow searching the UPhone fields in Contact2 as well.)

To use GoldPop with 3CX Assistant: 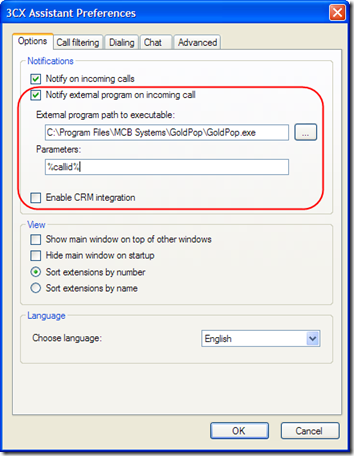 MCB GoldPop is free for personal and commercial use. However it is still copyrighted, and unauthorized publishing/distribution, incorporation in other products, and derivative works are prohibited. No warranties.

This is just a small example of how a relatively simple custom program can add significant efficiency to your workday. Contact MCB Systems to discuss your next technical challenge!

July 2, 2012 Need to auto-dial outbound calls, and automatically create GoldMine history records for your calls? Check out the new MCB GoldLink to 3CX!