So you’ve used Windows Server 2008 bare metal restore and it wiped out your Dell Utility Partition. What to do?

Background:  I’m setting up a Windows Server 2008 R2 machine as a Hyper-V host on a Dell PowerEdge 2900. I originally configured two RAID arrays (0 and 5). Starting with the Dell Systems Build and Update DVD and the companion Windows OS install support pack (required for Server 2008), I created the Dell system utility partition and installed Windows Server 2008 R2.

Later I decided that I wanted to try a single RAID 10 configuration. So under Windows Server 2008 R2, I used the native Windows Server Backup utility to create a backup with all the components required for a bare metal restore. Then I used the RAID BIOS environment to wipe out the old RAID configuration and create my RAID 10. Finally I restored the server by inserting the Server 2008 R2 installation DVD and doing a bare metal restore.

That worked great, except… because I had wiped out the old disk configuration, and because Windows Server Backup doesn’t see the (hidden) Dell system utility partition, that partition was created, but not restored. Here’s the view in Disk Management after the restore:

In another test, I started the process from the Systems Build and Update DVD again. It wiped out all the partitions, re-created the Utility Partition, then asked for the Server 2008 R2 DVD. After I put that in, I got the “Install Now” button but there was no Repair option, so I couldn’t re-do my bare metal recovery. I had to reboot directly to the Server 2008 R2 DVD to get to the Repair option and do the bare metal recovery. Since the Dell Systems Build DVD wiped out all the partitions, I had to let Windows Restore re-create the partitions so it would have a place to restore Windows. That is, I had to leave “Format and repartition disks” checked. When it does that, guess what, it wipes out all the partitions (basically re-creating the  MBR record from the backup), so the Dell Utility Partition is gone again. Possibly I could have unchecked “Format and repartition disks” and manually created partitions from the WinPE command line, but what if I don’t know the exact partition sizes for the Windows restore?

Can’t Fix from within Windows

Okay so I have an empty 32MB partition that is already set to type “DE” (Dell Utility Partition). Really all I need to do is get the Utility Partition contents back onto this pre-allocated but empty partition, right?

My first thought was to run this 32 Bit Diagnostics program, which includes an option to Update Existing Diagnostic Partition: 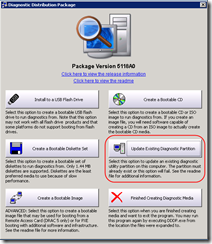 Unfortunately that gave the message  “Update not possible – No Diagnostic Utility Partition was found or there was an error accessing the partition!”

Later I came to understand that the utility partition is set up with a custom boot sector, which the above utility probably does not recreate.

I thought maybe I could manipulate the partition under Windows, but I found that I could not even see the volume on the system utility partition from inside Windows. I blogged about that here:  Diskpart Does Not See Volumes on OEM Partitions. I realized that I needed to be working in a WinPE environment.

Googling around, I came across the documentation on UPINIT, part of the Dell OpenManage Deployment Toolkit. This little 29MB download contains almost everything you need to populate a utility partition that was created when you did a Server 2008 bare metal restore.

UPINIT (Utility Partition Initialization) is a script that creates and populates the utility partition from an “image” (which in this case is really just a zip file renamed to have a .bin extension).

The UPINIT documentation says that it “ensures that no partitions are present on the target disk.” However by examining the UPINIT.BAT batch file, it looks like that only applies if you are not using the –overwrite parameter. If you ask it to overwrite, and it finds the utility partition, it should format it, set up the boot sector, and copy the image, without disrupting your other partitions.

Warning UPINIT calls diskpart to manipulate the partitions on your disk. What’s the worst that could happen? You could lose all the data on all your partitions. Have a complete backup before using UPINIT.

I do have a full backup, and I’m in a pre-production environment, so I decided to give it a try.

The one thing not included in the Deployment Toolkit is a 64-bit unzip.exe utility. I found that open-source InfoZip worked great:

The basic procedure is to get the Deployment Toolkit and unzip.exe onto a USB stick, then to access that from the WinPE environment created by the Windows Server 2008 R2 installation DVD. Here are the details:

The one thing I was nervous about is that the UPINIT does not patch the MBR when the utility partition already exists (see line 271 of UPINIT.BAT). I have no idea what the sysdrmk 0 MBR command does, but fortunately it seems it was not needed in this case.

It seems like Dell could create a simple bootable CD (WinPE or Linux) that would reload the contents of an empty system partition after a Windows 2008 bare metal restore. Until they do, at least this workaround is available. Did it work for you?