Lenovo servers have a maddening format for BIOS versions. Given this nine-character BIOS version from MSINFO32:

and this undated history of 3-character BIOS versions from the latest BIOS release: 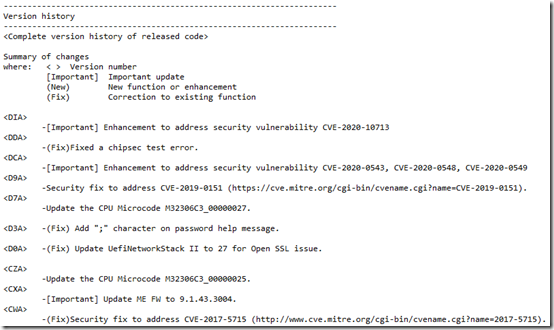 Where is the correlation? Where is FBKTD7AUS in the list of versions? Does the “AUS” suffix mean that I have an Australian BIOS?

wmic bios get smbiosbiosversion is no help; it returns the same thing:

Finally my eyeballs wrapped around the pattern:  4 meaningless characters + 3 characters of BIOS version + “US” for, I assume, United States. So FBKTD7AUS = FBKT + D7A + US. D7A is listed in the history.

Et voilà, after the BIOS update, the server has BIOS version FBKT + DIA + US:

The “DIA” corresponds to the latest version in the list above.