Backups only help if they run, so a key component of reliable backups is knowing that they are successful every day. Windows Backup and Server Essentials Backup, for example, write events to the Windows Event Log when the backup starts and when it completes each part of the backup. Once a day, I run a script from my Remote Monitoring and Management (RMM) tool to count these events. If there are too many or too few success events, or a failure event, the script alerts me with an email.

Synology Active Backup logs events to a voluminous proprietary log (C:\ProgramData\ActiveBackupforBusinessAgent\log\log.txt) but does not write events to the Windows Event Log, so I can’t check for missing backups with my usual scripts. Today, I received an email alert from a NAS telling me that “The following tasks on MYNAS have missed their scheduled backups because the backup sources were disconnected from Active Backup for Business.”  When I checked the device, I saw that there is a certificate issue that started 18 days ago: 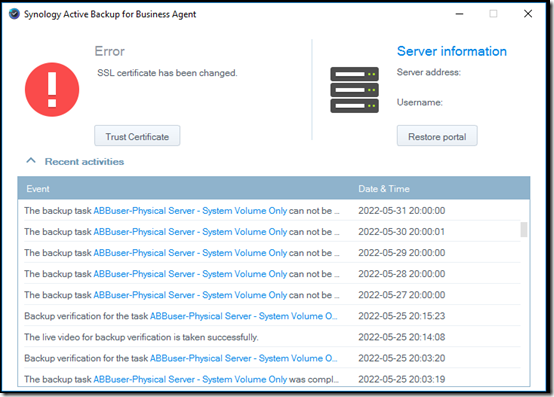 The certificate error is easy to fix (it happened after I replaced the expired SSL certificate on the NAS) but that’s 18 days without a backup.

When I log in to the NAS, I see that there is a notification on May 26 that the backup source device went offline, but I can’t find any email alert about that. Unfortunately, logs on the NAS are even more opaque than on the ABB Windows agent. I have yet to find a central area to view all logs, much less set up automatic monitoring. I’ve installed Log Center, but that doesn’t show all logs, just a few system events. Interesting that the Log Center does show this event on June 10:  “Scheduled Task [ActiveBackup check miss schedule task] was created.” Apparently the email that came today was the result of a new scheduled task that was implemented as part of the June 10 update to Active Backup. However, when I review Task Scheduler in the Control Panel, there is no such scheduled task. More obfuscation and opacity.

This reddit thread explains how to list Synology system tasks. SSH into the NAS, sudo –i to change to root, then /usr/syno/bin/synoschedtask --get to lists the tasks. Here’s the new missed backup task and the options available:

So, kudos for adding a missed backup notification, but it’s still unnecessarily complex and opaque.

Sigh. I just discovered another missing notification:  the backup agent was ready for update on a source server, but I only saw this when I opened ABB and looked at the list of Physical Servers.

2. Centralize all system and application logging in the NAS. Add granular, configurable log monitoring and alerting—including the option to alert on missing events.

I realize #2 is probably a big re-architecting job, but #1 should be pretty straightforward:  just write a few key ABB success and failure (and agent update available) events to the Windows Event Log.

This one is particularly puzzling. Active Backup supports two types of backup of physical machines:   full-featured, VSS-aware backups that can be used for bare metal restores and file-only “File Server” backups. The full-featured backups are “pushed” from an agent installed on the devices. The File Server backups are configured on the NAS itself and use SMB to “pull” files across the network.

The puzzling thing is that Synology decided that when you do full-featured backups, you will either back up all the drives on the source device (optionally omitting external drives), or the System volume only:

This is very limiting, especially for servers. Best practice for configuring a Windows server is to create separate system and data drives (as recommended by Microsoft). I usually use C: and D:. Frequently I add one or two other internal drives, e.g. to use as a target for other backup programs, or for storing bulky update files that don’t need to be backed up. Even a PC or Virtual Machine might have extra volumes for some specialized purpose. But to back up a multi-volume server with Active Backup for Business, I have to install the ABB agent to back up the System volume C: only, then I have to create a separate job on the NAS to do a File Server backup of drive D:.

I did a test bare metal restore of one such server. After baby-sitting the Drive C: bare-metal restore, the server could hardly boot without the data on the D: drive. Finally, after the file-level restore of the D: drive across the network completed, the system started performing normally. This look a lot of extra time and headache, all because ABB was unable to back up and restore just the C: and D: drives together.

I don’t think I’ve ever encountered a backup program that did not let you select which drives to back up. I am probably going to have to stick with Windows Backup or Veeam to back up these servers, both of which allow selecting source volumes: 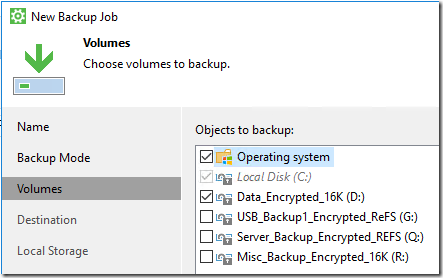 Allow selecting volumes when creating an ABB job for a Physical Server, PC, or (for that matter) Virtual Machine.

Less than two weeks after publishing this article, I discovered that individual drive selection is available, at least for physical servers: 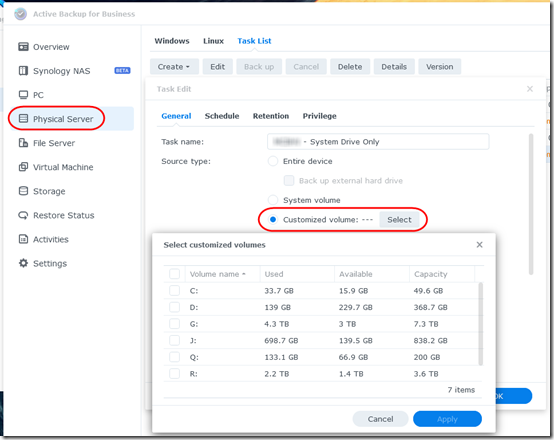 In fact, it looks like this option has been there for some time. It doesn’t show up at the Template level (where I was looking for it); you have to drill down into the machine-specific level after the Task is created. Which makes sense now that I think about it. According to this page, Customized volume selection is available on PC and Physical Server backups, but unfortunately not on Virtual Machines:

Meanwhile today I also found another instance where the client is disconnected and backups have been missed for several days but I haven’t been notified. So the need to have ABB events in the Windows event logs continues.

Synology has a difficult balancing act in some regards. The traditional NAS user may expect a NAS device to be simple to manage and not look for detailed logging and flexible drive selection. But with Active Backup for Business, Synology is trying to “up their game” and compete in the business backup space. For this, they need to enhance the product so experienced system admins can track backups in the Windows event log and can choose which drives to back up.