If you rename a user under Windows 10 following a procedure like this, your Windows 7 backup may start failing, unable to find files from the previous username. In the log file, you’ll see messages like “Backup encountered a problem while backing up file C:\Users\<OldUser>\Pictures\Saved Pictures. Error:(STATUS_WAIT_3 (0x80070003)).”

I have not been able to figure out where Windows backup is getting the old username. But I finally found a two-part solution that stops the errors:

1. Open an administrative command prompt and run wbadmin delete catalog. Unlike on Windows Server, this apparently does not delete the backup schedule. This will reduce but not eliminate the number of errors in the backup log.

2. Under Windows 7 Backup, click Change Settings, choose a target, then Let me choose what to back up. Uncheck Back up data for newly created users. 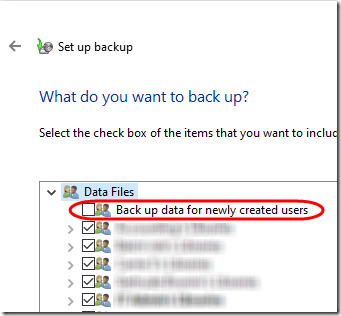 After that, the backup should complete without errors. If you add users to the computer later, you’ll need to manually edit the backup selection to include them.

Well it turns out that wasn’t enough. Also:

1. Create the missing folders listed in the backup error report:

2. Run through the backup selection wizard as above.

3. Rename the folder you just created:

4. Run the backup. It should complete without errors.

6. Run the backup. It should still complete without errors.

7. Edit the backup selection again. This time, check Back up data for newly created users.

8. Run the backup. It should still complete without errors.

Good grief. Maybe creating the folders temporarily and running through the wizard would be enough. Somehow it has to figure out that the old user’s folder is being removed. At least this seems to have finally fixed it and it should Back up data for newly created users.