I recently bought a Dell PowerEdge T30 for a small customer. I can’t guarantee yours will arrive the same way, but here are a some notes on what it did and did not have.

I added a 16GB Hynix HMA82GU7CJR8N-VK module that seems to be working fine.

It came with four blue plastic drive caddies, one containing the 1TB drive. 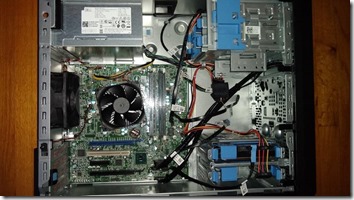 There are only SATA connectors on the motherboard. So even though there are four drive bays plus the DVD drive, only four of those five devices can be connected via SATA to the motherboard.

It does not come with a keyboard or a mouse.

There is no RGB port. You’ll need a Display Port monitor (this one might work, but I haven’t tried it) or a DisplayPort to VGA adapter. If you want to use the computer “headless” (without a monitor) but you still want to be able to use the AMT vPro Remote Desktop feature with MeshCommander,  you’ll need a Display Port emulator. Or, if you leave the DisplayPort to VGA adapter attached for occasional use, but not plugged in to a monitor, you’ll need to leave a VGA emulator plugged in to the adapter for headless access.