I’m running 3CX v.16 in the cloud. I have a local Yealink T54W desk phone and the 3CX Windows client. After getting a new desk phone, I was having an issue with the 3CX client’s Computer Telephony Integration (CTI) mode.

With my old Yealink T42G phone, when I dialed from my GoldMine CRM using MCB GoldLink to 3CX, the numbers I was dialing would immediately appear on the phone and then the called number would start ringing.

With the T54W however, all I would see is “MakeCall” on the phone, then I’d be listening to 3CX hold music until the other party answered.

I thought the difference was because the T54W was not officially supported yet. Now it is, but after updating the phone template, I still had the “MakeCall” behavior.

It turns out this was not an issue with the desk phone at all. Eventually I discovered the issue:  when 3CX is set up in the cloud, the 3CX App itself must be configured to use the public cloud URL as the In Office address: 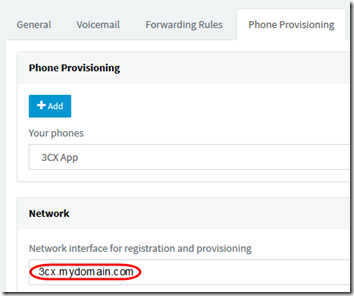 In the 3CX client, under Settings > Configure Accounts, that appears here after you exit and restart the client:

If you see an IP address in these fields, you’ll get the “MakeCall” behavior. Once you change it to use the PBX’s public URL as the In Office URL, CTI should immediately dial the phone.

STUN vs. SBC and “No Phone Connected”

I’d been using STUN for a while with the T54W. In trying to solve the above issue, I changed to SBC on Windows. This caused a new problem:  the 3CX client told me that no phone was connected:

I wondered if my updated custom template was causing an issue, but all I had to do was disable the proxy in the phone’s interface (reverting to STUN) and the client found the phone again.

Eventually I looked at the desk phone and noticed that the line icon was gray instead of green, indicating that the phone wasn’t registering. Aha! My SBC configuration was out of date—I had hard-coded the PBX’s IP address (TunnelAddr) in this file:

but the server had moved. Once I fixed that and restarted the 3CXSBC service, the phone registered and the 3CX client immediately saw it: