A client uses a Sharp MX-3570N Copier. There are a couple “gotchas” when moving that printer to a new server.

When you set up the 64-bit PCL6 print driver, it does not automatically detect the printer’s capabilities. You need to open the printer’s Properties on the new server, click the Configuration tab, and set the options there: 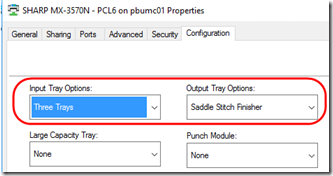 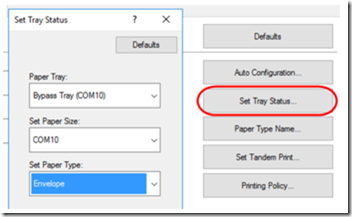 With this configuration, the image in the lower right should show three paper trays and the output trays to the left:

If you fiddle around enough in the registry (see below), you might see this strange message in the client computer’s printer Properties:

“The Favorite is not available on current configuration setting. Do you wish to delete this Favorite?” 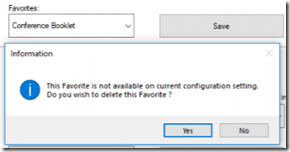 Basically that’s telling you that you’re trying to use a favorite that targets a printer feature that is not enabled. Once you configure the printer as described above, the old favorites should work after you restore them below.

Even if you give the printer the same name on the new server as on the old, users’ favorites will not be available, because they are tied to the server name in the registry. I couldn’t find a way to export/import them in the UI, but this registry hack worked for me. Use at your own risk!

2. Export this entire registry key as a backup:
HKEY_CURRENT_USER\Software\SHARP

Now, in the printer dialog, you should see the full list of favorites: 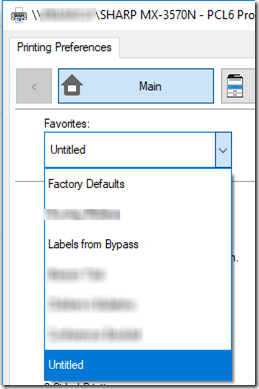 Bonus Tip – “A Referral Was Returned from the Server”

A maddening issue with sharing the printer using Print Management and group policy is that when you try to Deploy with Group Policy, you may repeatedly getting the error, “A referral was returned from the server.” You’ll find a long discussion here, but one trick I’ve found helpful is to go back to the old server (the one you’re migrating from), add the new server in Print Management, then Deploy with Group Policy from there. You might have to try a couple times, but not 30+ times as when using Print Management is on the domain controller. There is something about accessing the group policy over the network that seems to work better than accessing it locally.