I wanted to get TLS connections working between remote Grandstream phones connected over the Internet to a Grandstream UCM6102 PBX. This location already has an SSL certificate for its web site issued by a public Certification Authority. Here’s how to set up TLS with that kind of certificate.

It’s possible that your Certification Authority already provided files in the required format, in which case you can skip this section.

I found this helpful article on how to use OpenSSL on a Windows machine to convert a .pfx file to the required certificate and private key files. Yes, you’ll need to download and install OpenSSL if you don’t have it already. Run the following commands at a command prompt. You’ll be prompted for the password you used when you exported the .pfx file, and when extracting the private key, for a password to use to encrypt the key:

Extract the key, save as an encrypted key:

Decrypt the private key and save unencrypted:

Get the Common Name of Your SSL Certificate

When you requested an SSL certificate, you told the Certification Authority what name the certificate should be valid for. To find that name, open the SSL certificate .crt file in Windows. On the Details tab, highlight the Subject. The value in the lower pane after “CN” is your certificate’s Common Name. In our case, I’ll call it remote.mydomain.com. 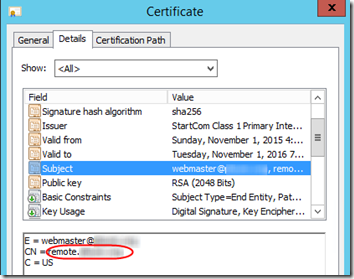 Your public DNS must point that common name to the network where the UCM is installed. If you’re already hosting a web server on the same network, the public DNS is probably already configured.

Set Up the Router

This assumes you have the UCM6xxx plugged in to a router that controls port forwarding.

By default, SIP traffic travels on UDP port 5060. That was getting a lot of hack attempts, so I closed 5060 that on the router.

TLS is an encrypted protocol. Encryption doesn’t work on the UDP protocol, so it uses TCP. Set TCP port 5061 to forward to the UCM.

Set Up the Phones

My test phone is a Grandstream GXP2130. In the account that should connect via TLS:

In the Grandstream Wave softphone app, the settings are similar:

Set Up the UCM

Note that even after uploading, the UI still shows “TLS.crt” and “TLS.key”, not the names that you uploaded: 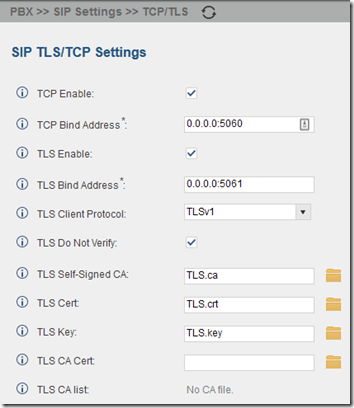 Assuming you are using a certificate issued by a well-known public Certification Authority, you should not need to upload a TLS Self-Signed CA or a TLS CA Cert. 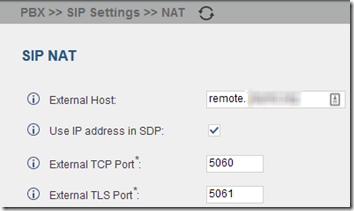 After saving these changes and rebooting the router, you should be able to connect phones across the Internet using TLS.