When I switched back to Cox for Internet in January 2016, the contract installer ran a new drop from the pole to my house, all the way to the jack where my cable modem is plugged in. I’ve been having ongoing, intermittent connectivity issues ever since.

The main symptom is that the connection would become very spotty (10-50% packet loss of a continuous ping) for a few minutes or hours, then return to normal. Power cycling the cable modem always fixed the problem temporarily.

I finally got a contract technician out on June 3. Before ringing the doorbell, he knew that my Tx values were low. He removed the thin blue 3db FAM-3 attenuator that was attached to the back of my Motorola SB5101U cable modem and attached a fat silver FRSA50-12 "return pad" to boost the Tx. After that, Tx showed green on his tablet and he thought all was well.

That didn’t fix it. Every time I called in, I was told that my modem is old and should be replaced. I finally installed a $90 Arris SB6183.

That didn’t fix it either. But when the signal started failing after a couple weeks of uptime, I noticed a lot errors on the modem’s web page (http://192.168.100.1), including many “Uncorrectables”: 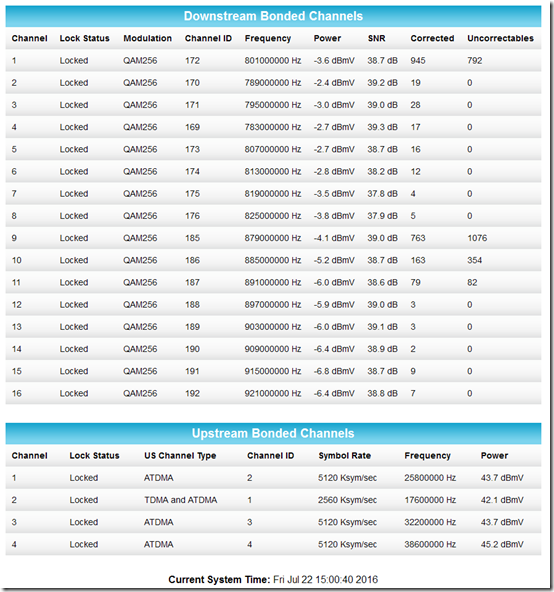 I called in again. The phone tech said I had “escalating T3s” which usually indicate a problem in the inside wiring. Would I like to schedule a tech even though it might cost me a service call? Yes. (My inside wiring consists of exactly one 10-foot cable which I wasn’t too worried about.)

The contract tech that came on July 23 was more thorough. He went to the pole in the alley, and the pole before that. He found an old “trap” of the type no longer used. I think they may have put that in years ago when I chose Basic cable rather than their premium packages. I canceled cable TV long ago so this is truly an artifact. Wish I’d taken a photo but it was basically a two-foot piece of coaxial cable with a two-inch cylinder at one end covered in a plastic shield. The description in this post sounds reasonable.

Anyway the tech said that could interfere with Internet and removed it. So far, my Corrected and Uncorrectables are down to 0: 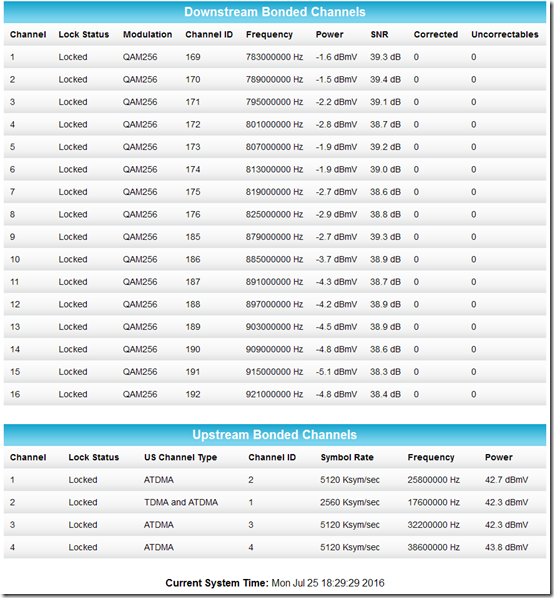 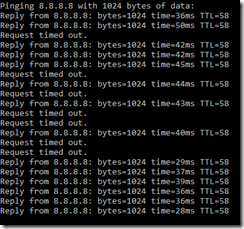 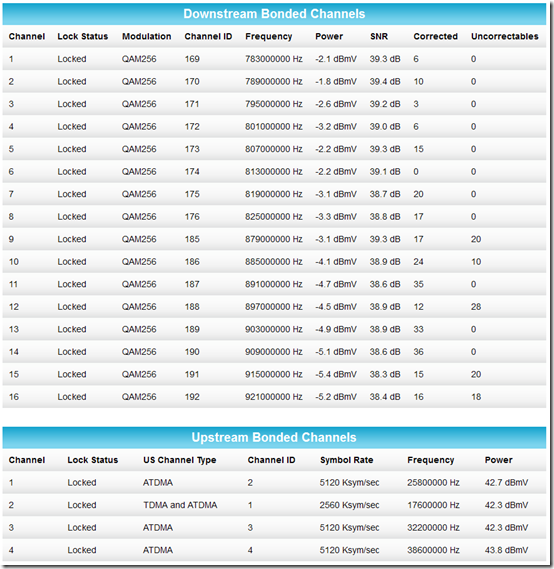 At my request, Cox sent an in-house employee yesterday. He checked my numbers, which looked okay while he was here, and set up a “ghost ping” or “smoke ping” for a week that should let network technicians see errors and eventually locate the source.

This morning, the connection is flaky again. Screen shots: 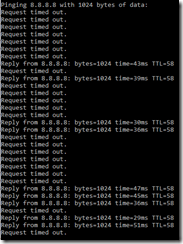 The modem seems to think everything is fine: 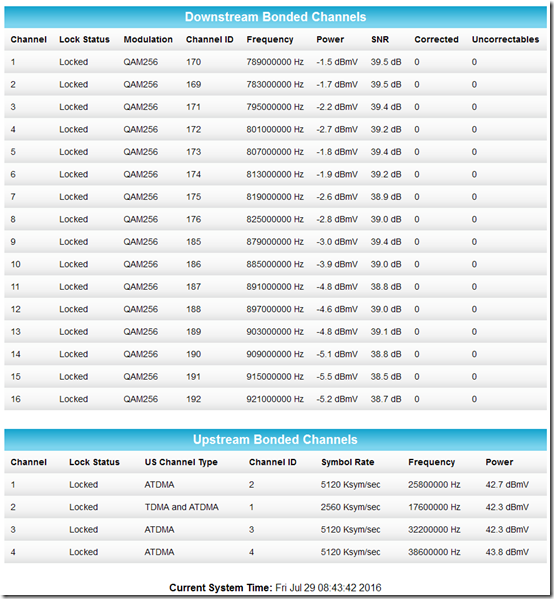 Speedtest.net gives a more accurate representation of the issue—not dead, but certainly not the 15/2 of the Internet Essential plan. Upload is especially affected:

Tried to test it again:

The rep asked me to try connecting my PC directly to the cable modem, without resetting the modem. When I did that, the PC could not even pull an IP address from the modem. That’s not surprising:  I’ve always had to reset cable modems when the connected device changes. Once I did reset the modem, everything was fine:  no packet loss, speed 16.3/2.2. I reconnected through the router, resetting both the router and the modem, and I’m down to 14.8/0.3 with packet loss. A few minutes later, it’s back to 15.9/2.1 with almost no packet loss. Like I said, flaky.

This is the second day in a row that the connection was bad from about 8:30am to 9:30am, then mostly cleared up again. 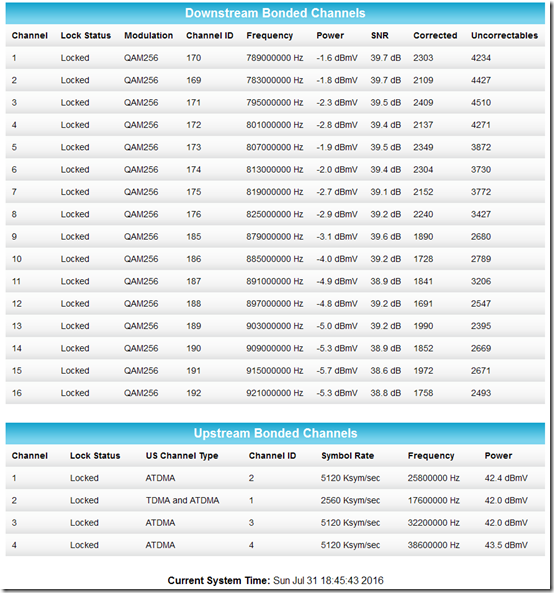 No wonder the Internet seems slow today. It is.

My new Arris SB6183 modem is still showing the exact same Uncorrectables as yesterday. I decided to power cycle it and noticed that the modem itself and the return pad that Cox installed on June 3 are very hot to the touch.

I’ve been carrying on an SMS conversation with the Cox tech who was out on July 28. He confirmed on August 3 that they were able to see packet loss on my connection and on for all my neighbors plugged in to the same tap. He requested a review by network guys with the bucket truck, and although I didn’t see them, he wrote yesterday, “They fixed some bad feeder connector” on August 4. “It may have been down the line from your house. Checked it out in smoke ping and everything looks good in the system now.” The connection has been stable now for a couple days, and after one more (final?) modem reset, the error counts are back to 0. He’ll leave the smoke ping running for a few days to confirm that it’s fixed.

If you have problems like this, after the phone technician sets up your field tech visit, ask to be transferred to Billing. Explain that you have had outages fox x days or weeks and would like a credit. They can look at your call history, technician visits, etc. It doesn’t remove the frustration of dealing with intermittent outages, but it helps to not be paying for service that isn’t working right.