I’ve blogged about checking Windows Time Settings and how sometimes Windows Time Stops Even When Set to Start Automatically. But what if you just need a basic setup for a domain controller or for a computer that is not joined to a domain?

Here are the commands I use (from an administrative command prompt) for a computer based in the United States. This is only for setting up a domain controller or a non-domain computer. Do not use these commands for domain members!

What the Commands Do

2. Set the time source to a /manualpeerlist consisting of the four U.S. pool servers from the ntp.org Pool Project. (See that site for servers in other parts of the world.) The peer list appears in the NtpServer registry value (see screen shot).

Also set /syncfromflags:MANUAL which tells it to use use the peers from the manual peer list. This sets Type to NTP (see screen shot).

5. Display the current time. Make sure this is correct!

Sample output of steps 2 through 4: 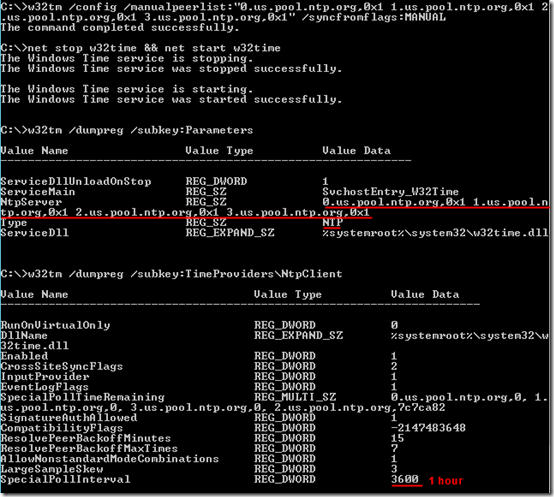 The last line in the screen shot shows the SpecialPollInterval.

Note the 0x1 after each server entry in the manual peer list. This SpecialInterval tells Windows Time to check the time every SpecialPollInterval seconds. If your SpecialPollInterval is already 3600 (1 hour) as shown above, that should be fine for a physical server. If your server is virtualized and thus subject to more clock skew, you may want to reduce that, e.g. to 900 (15 minutes). There is no command to do that; you must edit this registry value:

The TechNet registry values documentation has been updated for Server 2012/2012R2/2016. Under SpecialPollInterval, I stumbled across this new tidbit:

Strange wording. I guess it means that SpecialPollInterval should or must be between MinPollInterval and MaxPollInterval. I’m still on the main 1607 release of Server 2016, so this is probably not enforced yet, but better check it now.

KB3205089 is relevant but I believe the default values are incorrect. On my server:

Basically, if things aren’t always peachy, set AnnounceFlags to 10 (0xA) instead of 5. I actually had 10 already (not sure how that was set) but after using the Fix it from that KB article, it changed to 5. Since my server seems to be struggling to get remote time servers to answer, I’m setting it back to 10.

I’ve been trying to figure out why a virtual domain controller often shows “Local CMOS Clock” as when I run w32tm /query /source. Haven’t cracked it yet but a few tidbits I’ve learned:

You can turn on Windows Time Service debug logging.

This post suggests changing from 0x1 to 0x8 if you’re having trouble with symmetric packets, but that didn’t fix my issue.

To watch NTP packets on the WAN side of a UniFi USG router, SSH in and use this command:

To watch NTP packets on the LAN side coming and going to a specific internal IP address: