I recently upgraded my Hyper-V host from Server 2008 R2 to 2012 R2. It’s not domain-joined, and I did an in-place upgrade. Every 11 seconds, I was getting the following error in the Application event log:

Each section below lists an attempted fix. Jump to the last section for “The Short Answer.”

Microsoft Partner Support suggested that this might be caused by network drivers. This machine has both Broadcom and Intel NICs. For both, when I tried to update the driver, I got the message, “Windows has determined the driver software for your device is up to date.” Nonetheless, I decided to uninstall and reinstall the drivers to see if it helped.

Note that uninstalling the driver causes Hyper-V to lose the NIC association; it reverts to being an Internal network. After the drivers re-installed, I had to go back to the Hyper-V Virtual Switch Manager and re-assign the existing switch to the External network.

Another suggestion was to rebuild the WMI repository. I ran this script from TechNet:

After running the script, I ran winmgmt /verifyrepository. The repository is consistent. However, the errors continue every 11 seconds.

While working on another issue, I ran Process Monitor from Sysinternals. Interesting:  there are a lot of references to IProsetMonitor.exe, including unsuccessful attempts to read a “virtualization” key in the registry, followed by writing to a special event log, Microsoft-Windows-WMI-Activity/Operational. 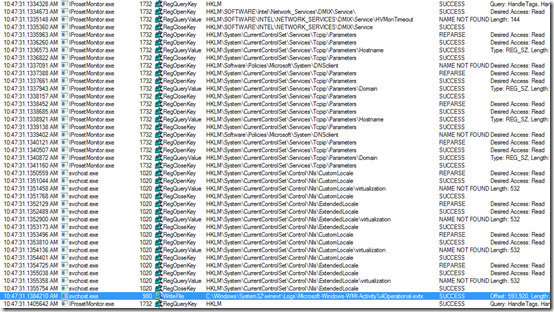 That “ClientProcessId = 1732” is interesting because it points back to IProsetMonitor.exe in Task Manager:

So finally we know where the error is coming from:  the Intel PROSet Monitoring Service. Sure enough, when I stopped that service, it stopped both the 5858 events in the Microsoft-Windows-WMI-Activity event log and the WMI 10 events in the Application event log. Phew! That’s a relief. I bet my system will run better without hundreds of events being written every few seconds. 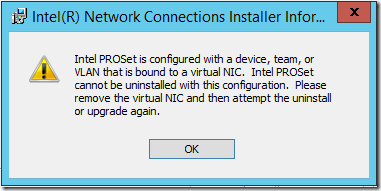 Well if I’m going to do that, maybe I should see if Intel has a later version specifically for 2012 R2. Yup, here’s ProWin64.exe version 18.7 for Server 2012 R2. I tried installing that and it said my computer has no Intel adapters (shown here next to Device Manager listing the Intel adapters): 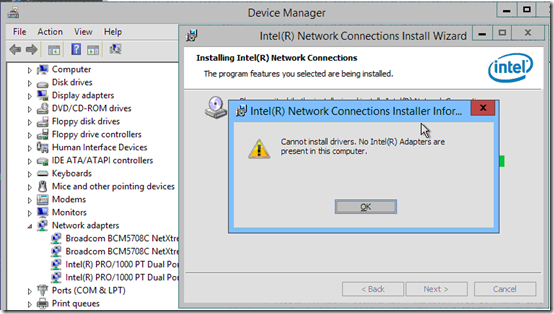 So I went back to the latest Dell version 14.5.1. that installed okay, but the WMI errors were back.

Eventually I found this Intel page about the level of 2012 R2 support for each of their NICs. It turns out that my PRO/1000 PT Server Adapter only has “In Box Support,” which means that PROSet for Windows Device Manager is not included. So I wound up doing a Modify installation on the latest Dell version, leaving only the drivers and the SNMP Agent installed: 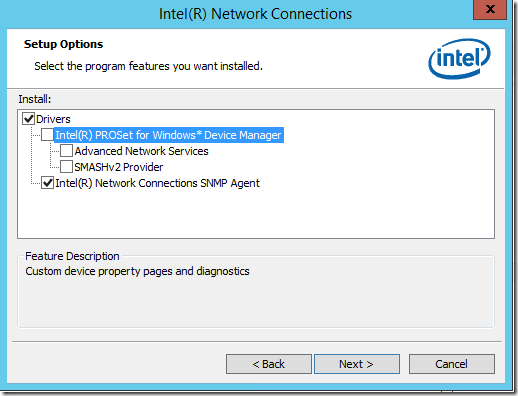 In that configuration, PROSet is not active and the WMI errors are not happening.

The last step is to re-connect the Hyper-V virtual switch to the physical NIC. After opening the Network Connections (ncpa.cpl) to confirm which NIC is plugged in, I went in to the Hyper-V Virtual Switch Manager and set the old virtual switch to use the “new” external NIC. That led to this message:

Great. How can every little step in setting up a computer be a failure? And why not give a reason for the failure?

Back to Google, I found lots of suggestions. One was to uninstall and re-install the network drivers. I thought I just did that, but I went to Device Manager, told it to uninstall and remove drivers on both Intel NICs, then rebooted.

This article had some low-level details on the errors. I followed the first part of those suggestions, including removing the old virtual switch from all virtual machines, but kept getting the error.

Finally on a whim, I tried unchecking “Allow management operating system to share this network adapter.”

Voila! The virtual switch was created with no problem. Then I went back in and re-enabled management:

That also completed with no problem (other than losing the Remote Desktop session—be sure you have console access).

Finally, I went in to the new vEthernet switch and set the machines fixed IP address and DNS servers:

If you’re getting WMI 10 errors every 11 seconds after a Server 2012 R2 upgrade, try these steps:

If you need to remove and re-create your Hyper-V virtual switch in order to uninstall the driver, see notes in the previous section.