I recently removed a volume from my SBS 2008 server, but I forgot to turn off shadow copies beforehand. Now I’m getting VSS EventID 7001 in the Application event log:  “VssAdmin: Unable to create a shadow copy: Either the specified volume was not found or it is not a local volume.” Apparently VSS is still trying to create shadow copies of the missing volume. How do I stop it?

Shadow Copies are created by standard tasks in Task Scheduler, but figuring out which task is no longer needed can be tricky. In many cases, the task will refer to the volume name, not the drive letter. How do you know which volume names are still in use? Try one of these handy commands:  vssadmin list volumes or mountvol. 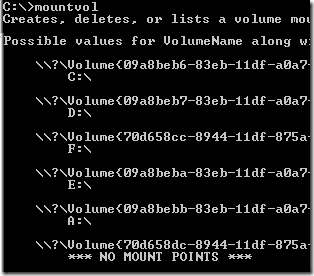 By comparing the listed (active) volume names to the volumes in Task Scheduler that have ShadowCopyVolume tasks, you can determine which of the scheduled tasks is the “orphan” and delete it.

However there is an easier way. The second part of the 7001 message tells you the command that is failing, in my case:

Go to Task Scheduler, find the corresponding ShadowCopyVolume task, and right-click to delete it: