I maintain a remote Windows XP Pro workstation that’s three or four years old. Today I had a strange situation:  I could reach the machine using vPro and see that it was powered on, but it did not come up in LogMeIn. I eventually managed to connect to it using Remote Desktop and started diagnosing the problem.

The following things did not work:

Most articles on this issue suggest a firewall as the issue, but this machine only uses the Windows Firewall, which does not block outbound connections.

One post mentioned inaccurate time as a potential issue. Well I had noticed that the system clock on this machine was off by almost six years: 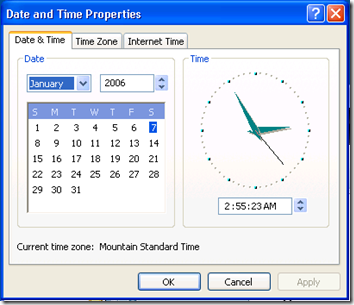 I figured I would fix that later, but after seeing that post, I went ahead and manually corrected the date and time, and poof! everything came back online. Huh, never would have thought that having the correct time was related to allowing programs to connect to the Internet.

For some reason, the Windows Time Service was not automatically updating the date and time. When I tried w32tm /resync, I kept getting “The computer did not resync because no time data was available.” It took repeated tries, stopping and starting the service, etc. before I finally got it to respond to the resync: 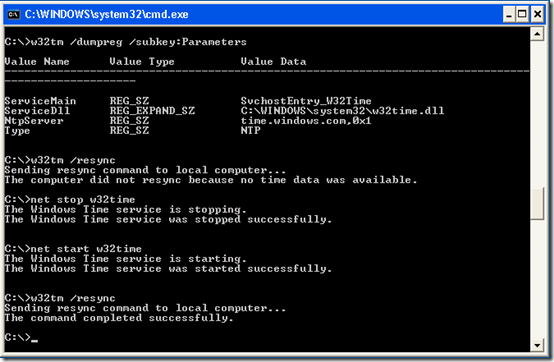 It remains to be seen if this is a long-term solution. When I shut down the machine, vPro (which can access the machine when it is powered off) again reported the system time as back in 2006. (The machine may need a new CMOS battery, but I’m 1000 miles away so that won’t happen soon.) After powering back up today, the date and time reverted to the correct value. If that fails again, and Windows Time is not correcting the time, I may try a third-party time sync program like the Atomic Clock Sync.