I’ve been working to write a flexible PowerShell script to retrieve and email warning and error events from computers in a small network. The computers variously run XP, Windows 7, Server 2003, SBS 2008, and Server 2008 R2. I wanted to include the new Applications and Services logs for Vista/2008 and beyond, so for those OSs, I use the new Get-WinEvent cmdlet that is part of PowerShell 2.0.

Besides accessing Application event logs, the big advantage of Get-WinEvent is supposed to be performance, especially when retrieving logs from remote computers. If you use one of the Filter parameters, the event engine does the filtering before passing the events (potentially across the network) back to PowerShell.

This is where things really got interesting.

Arguably the simplest of the Filter parameters is FilterHashtable. The Scripting Guy article has extensive examples on how to use this. And it works fine on Windows 7 and Server 2008 R2. The problem is, it doesn’t work at all on Server 2008:  all you get is “The parameter is incorrect”. Reportedly it fails on Vista as well.

This thread led me to this PowerShell bug report, which confirms that this is a known bug in “Crimson” (the new event log technology). On April 10, 2009, the PowerShell team said they were following up with the “owners” of Crimson; the bug was later closed as External.

I only wish all the Microsoft articles had included a big highlighted box like this article, warning me not to waste my time on FilterHashtable:

Note  The Get-WinEvent -FilterHashtable parameter works only on Windows 7/2008 R2. On Windows Vista/2008, it generates an error: “The parameter is incorrect.”

Fortunately, there is a workaround:  FilterXML does work on Server 2008; it’s just more of a pain to build up the queries using examples from the Event Viewer’s XML tab.

Filtering by Keyword Slower than Get-EventLog

The main thing I want my script to do is report all the warning and error events in all logs from the past 24 hours. This works pretty well in most logs, and Get-WinEvent beats Get-EventLog nicely, especially over the LAN. For example, here are the elapsed times needed to retrieve 13 events from an SBS 2008 Application log, which is 20MB and contains about 53,000 events (time in h:mm:ss):

You may have already noticed that in Vista/Server 2008 and beyond, the Security log considers security failures to be Information events. Actually they are recorded with Event Level 0, LogAlways, which means that “no filtering on the level is done during the event publishing.” (See the StandardEventLevel enumeration.)

This means that even in Event Viewer, if you want to find the security failures, you have to filter by Keyword, not Event Level: 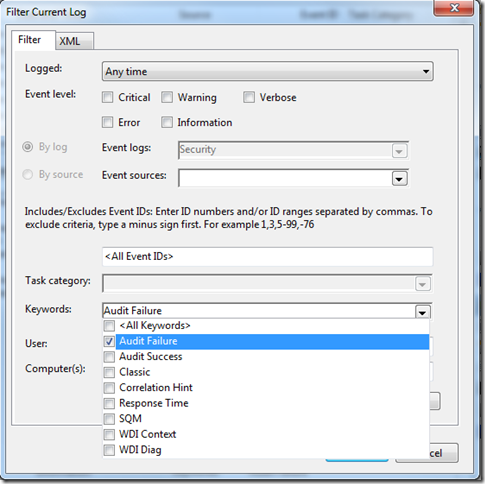 With the old PowerShell Get-EventLog cmdlet, to find Audit Failure events, even on Vista and beyond, you use

With the new PowerShell Get-WinEvent cmdlet, to filter for Audit Failure events, you include this in your FilterXML string:

They both work. The problem is that Get-WinEvent with the “Audit Failure” filter is much slower than Get-EventLog. For example, to retrieve about 24,000 events from an SBS 2008 Security log, which is 128MB and contains about 280,000 events (time in h:mm:ss):

No doubt the large number of events in the Security log compounds the problem, but that’s only about 27 hours worth of data. By the way, I also ran the tests on a Server 2008 R2 machine. There, Get-EventLog is still faster, but the margin wasn’t as great. However the R2 machine only has about 16,000 events, so it’s not a totally fair comparison.

If you want to try these tests yourself, here’s the script I used:

If you do run the test, leave a comment with your results.

17 thoughts on “PowerShell: Get-WinEvent vs. Get-EventLog”