In Server 2008 R2 (and probably other OS’s), when you do a chkdsk /f or chkdsk /r, you’ll probably have to reboot your system let chkdsk have exclusive access to the drive. But where are the results stored?

In the Application event log, filter for Wininit event 1001. This article talks about using PowerShell, but I find it easier to just use the Event Viewer’s filter option. 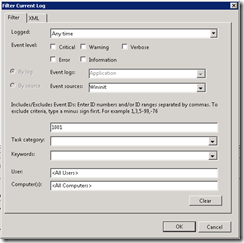 Here’s an example of the event(s) you should find:

Update April 1, 2011:  Recently I had an NTFS 55 error on my SBS 2008 system drive. I ran a chkdsk c: /r and rebooted. The chkdsk took about 45 minutes and I saw it grinding through files when I looked at the console. But after the reboot there are no Wininit events in the Application log! Where are my results? MS Support confirmed that there is no Wininit event after an SBS 2008 chkdsk. However, the results are available in the file C:\bootex.log. Strange that the events are written by XP, Server 2008 R2, Windows 7, and (according to a web search) Vista, but not by Server 2008.

2 thoughts on “Where to Find CHKDSK Results”