What’s the best disk setup on a small business server?

I recently got to play around with some options as I set up a Hyper-V host on a Dell PowerEdge 2900 with a PERC 5/i RAID controller. Here are some things I learned along the way.

Somewhere I heard that it’s good to keep the Hyper-V host on a separate spindle from the VMs. So I originally set up the machine to put the host OS (Windows Server 2008 R2) on 2 mirrored disks (RAID 1), then use three disks in RAID 5 for the Hyper-V data. I installed SBS 2008 on a fixed 80GB virtual hard disk. It took 3 minutes 5 seconds to boot and 4 minutes 17 seconds to shut down.

Then I read here that, “RAID 1+0 [aka RAID 10] provides better write performance than any other RAID level providing data protection, including RAID 5.” Fast is good! So I dropped the idea of a separate spindle for the host OS (which wasn’t completely separate anyway since it was on the same RAID controller). I set up a RAID 10 using six disks, which means striping across three mirrored volumes. The same SBS 2008 machine booted in 1 minute 43 seconds and shut down in 4 minutes 10 seconds. That means it boots 80% faster! Not sure why the shutdown isn’t faster; maybe it involves more writing to disk, which RAID 10 doesn’t help as much as reading.

On my RAID volume, I set up partitions formatted with 4KB and 16KB clusters. I created an 80GB fixed virtual disk on the 16KB host partition, and installed SBS 2008 with a non-standard 16KB cluster size for the client partition (here’s how). That’s what I was testing with above.

I also created a separate SBS 2008 installation on the 4KB host partition, and a matching 4KB cluster size for the client partition. Its boot and shutdown times were just a little slower than the 16KB version. 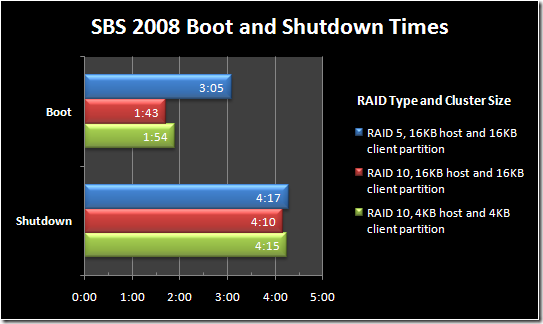 Here a few notes and links on cluster sizes and why you might want to go larger than 4KB in some cases:

The other major performance consideration that I came across while researching all of this is the need to align disk partitions to “stripe” boundaries, at least where SQL Server is involved. Fortunately Server 2008 does this automatically for the host partitions. How and whether that applies to client partitions (virtual disks) is not clear—how do you even know if a virtual hard disk starts on a stripe boundary? Some links for further consideration: