I’ve been running PBX in a Flash under the free version of Microsoft Hyper-V Server 2008 R2 for several months (blogged earlier). This week, I’ve added a couple test machines to the Hyper-V server.

Today I came in to see monitoring emails telling me that PBX had gone off- and online several times overnight. Sure enough, when I pick up the phone:  no dial tone. What happened?

I logged on to the Hyper-V host and started Core Configurator 2.0 and was a little alarmed to see that my PBX isn’t even listed as a virtual machine at all: 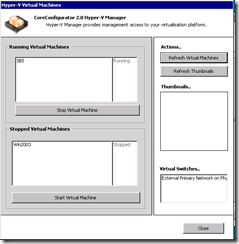 What? The PBX has disappeared entirely? Fortunately I also have Hyper-V Manager set up on a Windows 7 machine. This gave me the more complete picture:  the PBX, and a Vista Business test machine, were in a “Paused” state:

Next I fired up Server Manager, attached to the Hyper-V host, and started wading through the Hyper-V logs. Finally I found what I was looking for under

where I saw this event:

Sure enough, drive D was full. That Vista Business test machine had expanded its drive overnight during auto-updates. I moved some VHDs to another drive and was able to get the PBX running again. What I don’t fully understand is why the PBX, which has a fixed-size VHD, was paused due to space issues on the host volume.

In the same dialog, I also noticed that Core Configurator only lists one Network Switch, even though I have two installed, as seen in Hyper-V Manager:

I assume Core Configurator is not showing the second switch because I have unchecked “Allow management operating system to share this network adapter”. Again it would be nice to see the same information in Core Configurator as shown in Hyper-V Manager.

Core Configurator adds a wealth of features that would otherwise be very difficult to access on a Hyper-V Server machine. But you’ll still need a remote management machine running Hyper-V Manager to get the complete picture of the virtual machines, and remote Server Manager to see the host’s event logs.